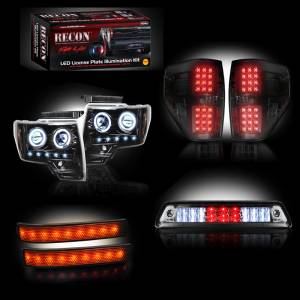 Recon Lighting Packages From Dales Super Store allow you to bundle lighting items and SAVE BIG at the same time.

ATTN: These DO NOT fit 2013+ Lariat, King Ranch, Platinum, FX2, FX4, or SVT RAPTOR's with OEM Projectors & HIDs as standard equipment from Ford. However, if your F-150 or RAPTOR is a model year 2013+ & DOES NOT have factory installed projectors with HIDs, then RECON projector headlights can be used & installed on your vehicle.

Attn: This product is a plug-n-play design boasting an installation time of less than 2 minutes.