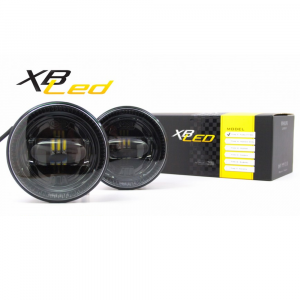 Designed: To fit modern Ford F150 Trucks; these complete housings will mount behind the bumper with all of the stock mounting points. Their aim can also be adjusted just like stock with the integrated assembly that's cast into their shell. Check the compatibility section below for a list of known applications.

Powered: by three Philips Luxeon-T 5700K LED's that produce around 1200 raw lumens per side. The projector based optics inside concentrate a total of 2400 lumens of pure white light into a beam that's super wide and perfectly distributed for use as a fog light. They are SAE, DOT, and ECE approved.

Plug and Play: Wiring is easy too! The XB LED Fogs are designed to work without any special wiring. They will plug into the factory power outlets for the stock fog lights and each fog light includes all necessary connectors, rubber seals, and pigtails for a plug n play install.

Direct: Fits perfectly on the 11-14 F150 trucks just like stock. On the 07-10 F150 trucks, you just need one new bracket so that the aiming adjuster mount lines up properly.