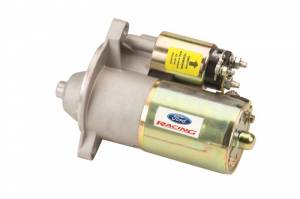 These mini high-torque starters from Ford Racing are a great addition to your car. They feature a high-output motor with internal gear reduction that provides more cranking power than stock, yet is 30 percent smaller. Their smaller size brings the weight down 5 lbs. from OE starters and provides a great deal more header clearance. These are the perfect starters for vehicles with high-compression engines and tight-fitting headers. Instructions and special battery cables are included, but you must use a firewall solenoid.