Ready to place an order? Have questions? Send us an email 24/7 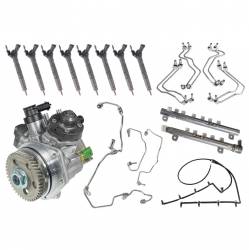 If your driving a Duramax LML diesel engine and have not yet experienced a major fuel pump failure – you are likely running on borrowed time. Failure of this CP4 pump is usually catastrophic; causing metal particulates to contaminate the entire fuel system. Some pumps seize up completely and burst the aluminum housing open as a result of this failure, causing thousands of dollars’ worth of damage and requiring you replace the pump, rails, injectors, all high pressure fuel lines, return lines and fuel filter; clean and flush all fuel chassis lines, filter pipes and other engine mounted fuel system pipes (low pressure) remove and clean/flush the fuel tank and fuel sender.

OR, you can replace all of the fuel system components with a Fuel Contamination Kit, thereby preventing recurring contamination issues.