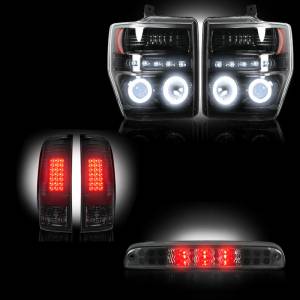 264196BKCC+264176BK+264116BK
Recon Lighting Packages From Dales Super Store allow you to bundle lighting items and SAVE BIG at the same time.

RECON's NEW 2nd Generation Ford SUPERDUTY 2008-2010 Projector Headlights!!! We're proud to introduce our completely redesigned Ford Superduty 2008-2010 projector headlights. This new 2nd Generation design features a 33% improvement in light output along with a wider more usable beam pattern over our 1st generation which we introduced in late 2008. These NEW 2nd Gen Ford Superduty 2008-2010 projector headlights feature a tougher cleaner appearance which will set your truck apart from the crowd. Thank you all for your valuable feedback...when our customers speak, we listen! Get Lit w RECON Today!!!