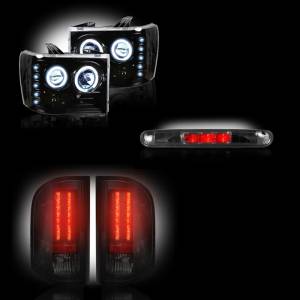 264271BKCC+264175BK+264125BK
Recon Lighting Packages From Dales Super Store allow you to bundle lighting items and SAVE BIG at the same time.

Keep in mind there are two H1 bulbs in each projector headlight, so you will need to buy two sets of headlight bulbs for each set of 2007-2013 GMC Sierra & Denali projector headlights you are upgrading the bulbs in assuming you want to upgrade both the low-beam and the high-beam