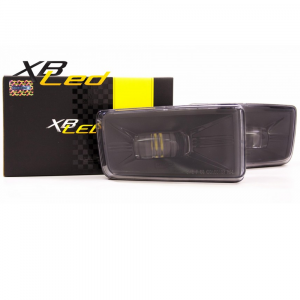 Designed: The all new XB ballasts feature relocated igniters like OEM units, putting them far closer to the HID bulb. The lack of high voltage transmitted through wiring drastically reduces EMI/RFI (radio interference). Total system reliability is also improved by shielding the main circuit board from the static produced by these high voltage bursts on start up. (not to mention they're damn good looking!)

HID Bulbs: Specifically for the 2007+ Silverado trucks and 2007+ Tahoes, these complete housings will mount behind the bumper with all of the stock mounting points. Their aim can also be adjusted just like stock with the integrated assembly that's cast into their shell. Check the compatibility section below for a list of known applications.

Plug and Play: Wiring is easy too! The XB LED Fogs are designed to work without any special wiring. They will plug into the factory 5202 power outlets for the stock fog lights and each fog light includes all necessary connectors, rubber seals, and pigtails for a plug n play install.