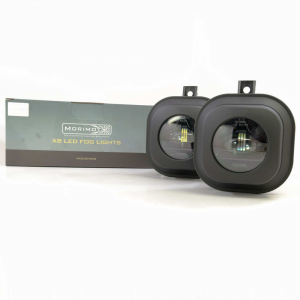 Designed: Specifically for the 2015+ Ford F150 Trucks to stylistically match the LED Headlights; these complete housings will mount behind the bumper with all of the stock mounting points. Their aim can also be adjusted just like stock with the integrated assembly that's cast into their shell. Check the compatibility section below for a list of known applications.

Plug and Play: Wiring is easy too! The XB LED Fogs are designed to work without any special wiring. They will plug into the factory H10 power outlets for the stock fog lights and each fog light includes all necessary connectors, rubber seals, and pigtails for a plug n play install.