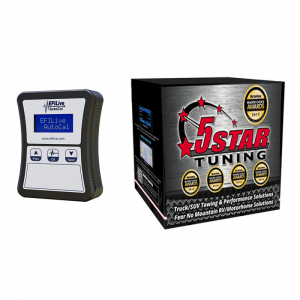 This is a EFI Live AutoCal device with custom tunes for your 2007-2013 Silverado/Sierra 5.3L includes your choice of up to 8 tunes from 5 Star Tuning and features a LCD display, built-in memory, & delivers a boost in both horsepower and torque.

Select tunes by Octane and Performance. 5-Star's custom tunes are available in several variations for 87, 89, 91, or 93 octane gasoline to give you a wide range of tuning options for your 2007-2013 Silverado/Sierra 5.3L

5 Star Custom Tunes include FREE tunes for the life of your vehicle when you purchase add-on products from Dale's Super Store. This will ensure your vehicle runs properly at all times with the 5 Star Tunes giving you the MOST horsepower, torque, and efficient performance of your vehicle.

How do I qualify for FREE tunes
THIS OFFER ONLY APPLIES TO YOU AND YOUR SPECIFIC VEHICLE FROM THE ORIGINAL PURCHASE DATE OF YOUR TUNER/TUNES. PURCHASE A TUNER/COMBO KIT OR EMAIL TUNES FOR A DEVICE THAT YOU CURRENTLY OWN. (THIS BEGINS YOUR ENROLLMENT INTO OUR LIFETIME TUNE PROGRAM). PURCHASE YOUR INTAKE, EXHAUST, HEADERS, THROTTLE BODY, ETC. FROM DALES SUPER STORE AND WE WILL REVISE YOUR CUSTOM TUNES TO INCLUDE YOUR NEW PARTS AT NO CHARGE.

What is not covered under Tunes for Life program
VEHICLES THAT DIFFER FROM YOUR ORIGINALLY TUNED VEHICLE AND THOSE THAT ARE PRE-1996. VEHICLES THAT FEATURE NON-STOCK FORCED INDUCTION NOT TUNED BY 5 STAR TUNING. NON-FACTORY CRATE MOTORS (FACTORY SWAP MUST HAVE MATCHING PCM), AFTERMARKET CAMSHAFTS, AFTERMARKET FUEL INJECTORS, NITROUS TUNES AND RACE FUELS ARE NOT COVERED.

Installation Tip: Installation will take approximately 5-10 minutes and we're confident anyone can do it. No tools required. If you have technical questions please contact us at 844-487-2787 or at [email protected].

Important Note: The software is ONLY compatible with Microsoft Windows computers. Once the tunes are successfully loaded onto the tuner, you can tune your truck. If we find that your F150 is behind on its latest TSB strategy updates, we may require you to have your TSB updates performed at your dealership of choice. Read our TSB Update blog post. If you need more information or assistance, check out our F150 Custom Tuning Page.

Important Note: Not legal for sale or delivery in the State of California.

Fuel Tables
Fuel tables are modified for either better economy or all out performance. Depending on your needs is how most tables are set up. We have noticed on the F150 3.5L V6 that the fueling tables are very conservative and rich in their strategies and have moderate delay timers set before allowing additional fuel. Long fuel delays create issues with additional power and torque improvements. However, some fueling delays are ok as they help with economy.

Drive By Wire
The F150 3.5L V6 suffers from poor throttle response down low. A custom calibration will have enhanced improvements in better throttle response, step on go pedal, vehicle will respond quicker…this DBW system is a torque driven system, it works by taking a certain amount of torque via engine and wheel and applies it to what the driver foot say it needs; a better way to explain it is its a torque limiter. It only allows so much torque at a given pedal position. Stock tables are conservative and numb at best and that’s why one would feel sometimes a lag or a goofy pedal with DBW systems. For a 3.5L V6 this is one of the most critical areas that must be addressed and modified to generate more torque /hp and throttle response. By reworking the OEM strategies makes your 3.5L V6 come to life!

Limiters
There are normally 3 types of limiters on most vehicles and the F150 3.5L is no different. RPM, MPH and transmission. Output shaft limiters are slightly increased to a safe limit in our calibrations. We also leave the safety factory limiters enabled and in place what Ford has set from the factory. This ensures a safe calibration for the life of your vehicle.

Timing
Can be increased in most RPM areas for improved Torque and HP. Running a higher Octane fuel will net more power and economy from some timing/spark advancement. However, with a 3.5L v6 even running 87 Octane fuel can yield some respectable gains in power and torque over stock with the use of no additional timing advance (aka factory tables). The knock sensors and strategy on the 3.5L v6 are very good in that they can advance and retard timing while you drive.

Torque Converter Strategies
In all F150 3.5L V6 vehicles the Torque Converter strategies can be reworked to lock up sooner and stay locked longer at light cruising speeds to also help with economy…A locked converter is power to the ground. Sometimes a stock truck when you hit any incline the truck will unlock OD gear and down shift. We can get your truck to hold OD longer and not unlock… now of course on large hills it will down shift…like it should… The converter strategies in our calibrations will have great emphasis on quick converter lock ups at the right mph and rpm as to take advantage of the low torque that is available from the 3.5L V6 engine. One big correction to make is to not lock up 3rd gear so soon as it tends to lug engine in factory form.

Shift Strategies
The 6 speed transmission that comes standard with the F150 3.5L V6 is a big improvement in driver controls over passed 4 speed transmissions. However, there are still some significant benefits to be had recalibrating normal daily shift strategies.

DAILY MODE We have noticed that while in normal everyday mode that the transmission will move into 6 th gear really quickly around town with speeds as low as 30-38 mph this really lugs the engine and when trying to accelerate there is a pretty good delay to build boost and either downshift or accelerate. We can correct this by moving some shift strategies patterns around in all gears especially in 4th, 5th and 6th gears. Our calibrations will have emphasis on shifting at the right mph and rpm as to take advantage of the low torque that is available from the 3.5L V6 engine, while maintaining great fuel economy.

TOW/HAUL Mode Coasting or slowing down the downshifts don’t command soon enough to keep the RPM’s up in torque range and when back in throttle multiple downshifts may occur. Also keep in mind engine braking; a V6 engine has less braking that Ford’s past V8 engines, so a quick downshift for braking is required for owners that are going to tow heavy. We have recalibrated tow/haul mode strategies that enhances keeping the engine RPM’s elevated to take advantage of the torque band which will require less downshifting by optimizing gears 2nd, 3rd, 4th and 5th. We have also enhanced the down shift patterns to allow better engine braking with this V6 engine. All of our calibrations have this new tow/haul strategy except economy mode calibrations.

Slip Pressures/Slip Timers
Shift pressures can be increased and slip timers can be decreased to help keep trans temperatures down and give the truck or any vehicle a better overall feel. In a F150 3.5L V6 shifts are quick and slightly firmer most of the delay between shifts are eliminated when using custom tunes.