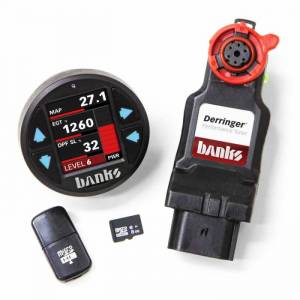 Stops the competition dead in their tracks. Results in torque and power gains across the full operating rpm range, starting right off idle and marching to the shift point in each gear. Derringer is dyno calibrated to use multiple data inputs such as throttle position, rpm, vehicle speed, AFR, Knock and coolant temperature, just like your engine's ECU. Its microprocessor-based electronics are able to actively and safely optimize calibrations in real time. No competitive product does that.

Derringer has six switched settings. Level 6 produces Best in Class performance and knocks you back in your seat. The Level 3 setting is for work use and has a great mid-range feel. When running Level 3 with a loaded work truck and/or pulling a trailer, your on-ramp merging speeds and passing times are greatly improved. The electronics are enclosed in a compact housing which is easily concealed and communicates using B-Bus (Banks Bus) with other devices such as our iDash 1.8 DataMonster® or iDash® 1.8 Super Gauge. The Derringer connects in line with your truck's engine sensors. But, unlike others, it also connects to the vehicle's OBDII diagnostic bus connector. A CAN (Controller Area Network) transceiver chip communicates with OBDII or B-Bus allowing our microprocessor to talk with the vehicle. And, Derringer's special coolant temp watchdog prevents power addition when the engine is too cold or overheated. The Derringer also auto-adjusts power if knock occurs due to bad fuel. Maximum safe power is all automatic with a Derringer - you just choose your setting.

The Banks difference when it comes to the 6.7L POWER Stroke!

The Derringer tuner — When it comes down to it, you want a real 6.7L Power Stroke tuner. You want something that makes big power and doesn’t kill your truck. After all, you just spent a lot of money on that beast. The Banks Derringer 6.7L tuner is the only option you should be plugging into your truck. Look, the other guys claim big numbers and we call bulls—t! We tested every other tuner on the same dyno, same day, same weather conditions, with the same technician… Same damn test, period! There’s only so much you can do by just intercepting the fuel rail pressure sensor. That’s where all the others fall short. The Derringer is the only tuner that actually utilizes your truck’s ECU to make intelligent calculations! 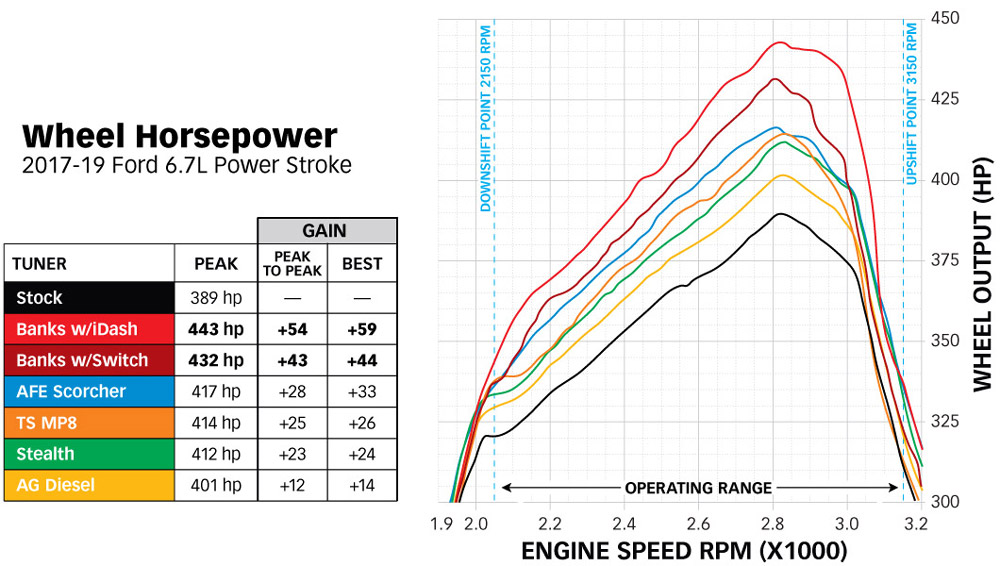 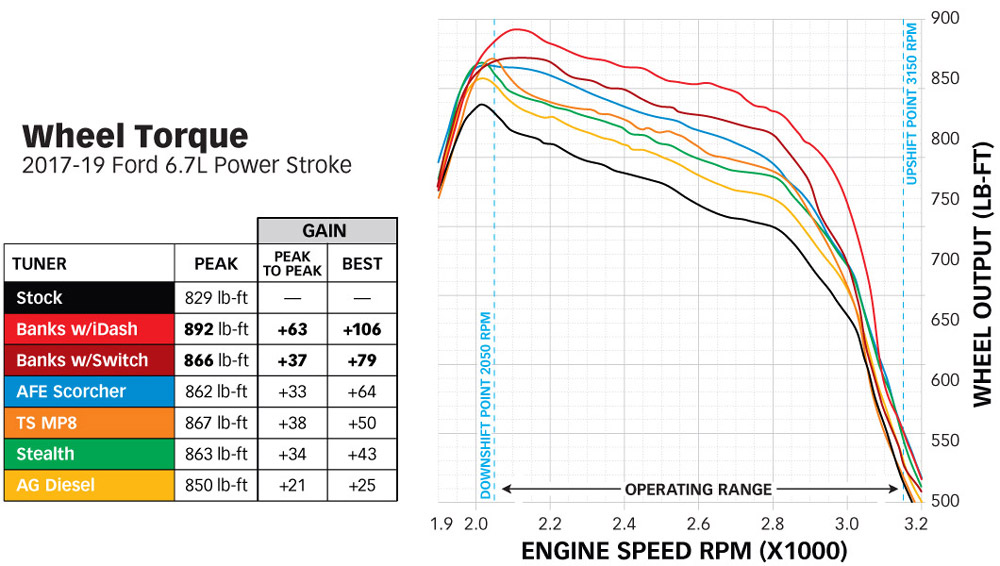 How the Derringer does what it does, and why.

There’s no easy way to make more power your daily driven 6.7L Power Stroke with Ford’s ECU and factory turbo, no magic flash or special “chip” available. We had to go the tuner route, and making an inline tuner for your truck was no easy task. We have almost a thousand man-hours into Derringer development. Fortunately, we’ve been making tuners for 20 years, so we know what we’re doing. The Derringer is a plug-and-play microcomputer designed for easy installation, it’s enclosed in a compact housing which is easily concealed, and connects to the iDash 1.8 Super Gauge for the ultimate in information and power selection, unlocking three additional power levels.

Unlike the fixed tuning used by others, the Derringer calibration is continuously adjusting to provide you the peak possible performance under every driving condition. By utilizing the power of the OBD-II data, the tuner intelligently fine-tunes its calibration on the fly without you having to change its power level.

The Derringer is the only tuner on the market to include ‘Active Safety’, an active failsafe system that utilizes bypass relays to smoothly transition your vehicle to stock power levels in the event of any trouble signs in the Derringer. The system constantly monitors various parameters at over 50 times a second to ensure that everything is operating as it should. If any competitive tuners lose power or fail in any way, they will instantly trigger a “limp home” mode where all power is lost and the vehicle dangerously slows to a crawl. If the same fault condition occurs to the Derringer it will gracefully remove its additional power and return to stock power levels without a hitch.